This is a repost of the Wikipedia article https://en.wikipedia.org/wiki/Taxicabs_of_Singapore

are a popular form of public transport in the compact sovereign city-state of Singapore, with fares considered relatively low compared to those in most cities in developed countries. Currently, the taxi number ratio is declining with the rise of Uber and Grab, private hire cars and tighter emission regime with at least minimum Euro 4 standard. With the Uber removal in April 2018, taxis will revive in Singapore.[1]

Taxis may be flagged down at any time of the day along any public road outside of the Singapore Central Business District (CBD). Issues of high traffic and demand in certain locations and areas, particularly in the downtown area and other major buildings and establishments around the island, require the building of taxi stands. As taxis may conversely be harder to obtain in less densely populated areas, as well as to meet the needs of time-sensitive users, taxis may be booked via telephone or through the internet for a fee, which is then transmitted to individual taxis via a Global Positioning System (GPS) or digital voice dispatch.

Stringent requirements ensure that all taxis are fitted with meters and are air-conditioned and serviceable. Drivers who fail to utilise their meters may be fined up to S$500, an enforced rule which brings fare disputes down to a minimum. About 90% of taxis have inbuilt AM broadcasting communications.

Taxis are predominantly operated by large companies, which require a Taxi Operator Licence (TOL) from the Land Transport Authority (LTA). Holders of the TOL are required to comply with LTA’s Quality of Service (QoS) standards, codes of practice and audit directions, failure of which the LTA may revoke the licence.

All taxi drivers in Singapore are required to hold a valid Taxi Driver’s Vocational Licence (TDVL) issued by the Land Transport Authority, after having met basic prerequisites and successfully completed a training course in the Singapore Taxi Academy and passing a theory test. Holders of the license may then approach any of the taxi companies to hire a taxi on a daily rental basis, the rental rate and associated benefits of which vary among the various companies.

Fares on Singapore’s taxis are considered relatively affordable and even “cheap”,[3] and are thus a popular form of public transportation in Singapore, particularly for the upper-middle income groups. Taxi fares were regulated by the Public Transport Council until September 1998 to allow operators full freedom in setting their own fares in a bid to introduce greater competition in the market.

Normal taxi fares are metered at $0.22 for every 400 m thereafter or less which is less than 10km and again every 350m thereafter or less which is more than 10km, and it is an offence for taxi drivers to disable, tamper with, or fail to use their metering devices. Drivers found guilty may be fined up to S$500. Higher metered fares applies to the limousine vehicles at $0.33. The normal flagdown fares varies from $3.20 to $3.90. Waiting can be done at $0.22 for every 45 seconds or less, booking can be done at $2.90 or $3.30. The peak hours are from Monday to Friday, 6am – 9.30am and 6.00pm – 12.00am, and has a surcharge of 25% of the metered fare. The public holiday surcharge is 25% of the metered fare, and whereas for late night, it is 50% of the metered fare. There is also a CBD surcharge of $3, together with Changi Airport surcharge at $5 on weekends from 5.00pm to 12.00am, and $3 at all other times. Others include $3 for Seletar Airport, $3 for Resorts World Sentosa and Singapore Expo.

Only about 70% of taxis in Singapore are equipped with airbags. Second Minister for Transport, Ng Chee Meng, state that airbag is a supporting safety feature and does not make it a mandatory requirement for taxis.[4]

Toyota Crown Comfort. The last of these were scrapped in September 2014 [5]

Nissan Cedric taxicab for SMRT. These have been officially retired along with the Toyota Crowns.

In 1966, the first diesel Yellow-Top taxi was the Mercedes Benz 180 followed by the Austin Cambridge A60, Morris Oxford Farina and Wolseley 16/60. In the 1970s there was the Mercedes Benz W114/W115. The Austin Cambridge A60 and Morris Oxford continued until the early 1980s followed by models of the Opel Rekord D, Peugeot 504, Morris Marina and the Russian made model Volga Gaz 24. 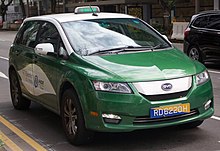 In the mid 1980s, the staple vehicles for all operators were the Toyota Crown, Nissan Cedric and Isuzu Florian. These were stripped-down versions of their Japanese luxury-car siblings, with an emphasis on operating costs over comfort. Cheap plastic fittings and PVC seats replaced materials such as wood and leather, insulation was removed to save weight, and early generation diesel engines replaced the original petrol units. The resulting vehicles were simple to maintain and extremely reliable, but were lacking in comfort, with very high levels of noise, vibration, and harshness (NVH).

Currently, the following vehicle makes and models are in use:

All of these vehicles (except for MPV taxis) seat 4 passengers unless otherwise stated.